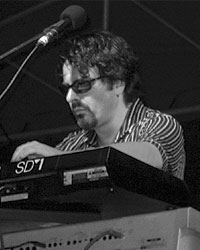 Just a little background... when I was a kid the first guitar my dad bought for me was a nylon string spanish guitar made by Goya Music. I think they were eventually bought up by Martin in the 70's. My first electric guitar was some off-brand, chinese manufactured black Gibson Les Paul copy that I bought on 48th Street in NYC. Probably Sam Ash or Manny's. The piano that you see scrolling above is the actual first piano that I learnerd on as a kid. It's a Baldwin Spinet upright from the 50's or 60's. It has a pretty warm tone and decent bottom end for a small upright. It sits in my living room, still in great condition. I play it regularly.


After moving to South Florida in 1985 or so, I got much more serious about my gear and upped my game. Here is a list of gear that I've used/accumulated over the years...Guitar Amps & Stomp Boxes '76 Roland Jazz Chorus 120 - bought it new and gigged with it for 30 years. Never once in the shop for repairs except to replace a couple of broken/snapped pots. This thing was abused. Got rid of it in 2011 after I decided to go "virtual" with my guitar setup.

'80 Fender Pro Reverb - mostly gets used in the studio for recording. 70 watts of great Fender tone. Heavy as shit though. :-)

Vox Valvtronix VT20+ - little 20 watt amp that is incredible for recording. It's got a 12AX7 tube driven pre-amp and solid state power amp, However, there is a thing they call a Valve-Reactor circuit sandwiched in between both amp stages. So there are a bunch of gain stage options you can dial up. Many different gain settings that affect the tube and how it interacts between both circuits. It even has a "power soak" feature on the power amp side. Don't know how they do that, but it creates that "sag" feel/tone. Very cool piece of gear.

Effects-wise... I used to love the original Electro-Harmonix and MXR stuff as well as some old Boss stomp boxes. Noisy, but oh so tone-licious. Old school baby.

Effects Rack/Amps/SpeakersPeavey - Every working musician has owned some type of Peavey gear at some point in their career. I've gone through a couple of their mixer/amp heads and small PA cabinets and floor monitors as well as keyboard amps over the years. I don't remember the model numbers. But I remember having to replace their cheap parts regularly and repair blown black widows and those gnarly sounding piezos all the time. By the way... my only experience is with their budget stuff. So generally speaking, not the greatest fidelity or workmanshiup, but they did the job with my limited budget at the time. 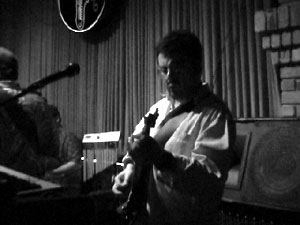 JBL - I used their 2 way, 15" for a while for keyboard monitoring. Tight and punchy sound. Top end was maybe a little fatiguing though.

DOD Mixer - Plugged all my keys and sound modules through it. I don't remember the model. It was an 8 channel with 2 sends. Pretty clean.

Rocktron Compressor/Limiter/Leveler - Even though it was made for guitars, I used it occasioanlly last in the chain to fatten up my analog synths. I used it a bunch on bass and electric guitars on the Mélange album for some extra vibe/punch. 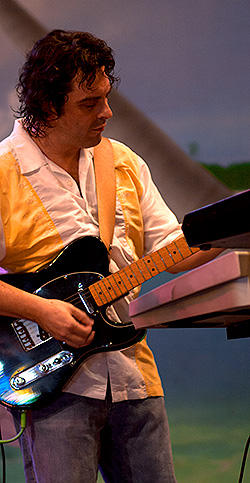 '77 Aria Pro II PE150 - Bought it new at the long de-funk Schirmer's Music Store in NY. Solid natural mahagony body w/P90 pickups. Styled kinda like a cross between an old Gibson Melody Maker and a Les Paul Jr. Neck through body. Great tone and sustain. I still have it today. As a matter of fact, there are quite a few tracks on Mélange that feature the instrument. It's pretty beat up, but man does it record great. P90 tone baby...

'75 Univox Hi-Flier Bass -  Black w/short scale rosewood neck w/humbuckers. It looked just like this. It was modeled after a Mosrite. Ugly as all hell, but it had this great smooth, thumpy tone. I tossed it out years ago at some point when I moved from one apartment to another. Damn, I wish I had kept it.

'86 Kramer American Pacer w/Flord Rose - Candy apple red. Split coil humbucker option in the bridge position. I gigged with it for many years. Real versatile instrument. Lot's of strat-like tones. Still have it.

I own a couple of acoustics that I use almost exclusively for tracking... Recording King ROS-o6 w/Fishman pickup system and a cheap Tyler Mountain dreadnought as well as a Valencia spanish guitar from Rondo Music. On the more esoteric side, there's a little Diamond Head Soprano Ukulele and an SX 6 string Banjo. All of these acoustic instruments are all over Mélange.

Keyboards/SynthsI dabbled in electronic pianos and synthesizers in high school. Some synths/keyboards I experimented with... My buddy had a Moog Prodigy that was very cool. And I also remember playing a little Moog Rogue, an Arp Odessey and also a Rhodes Mark II Suitcase for a while. 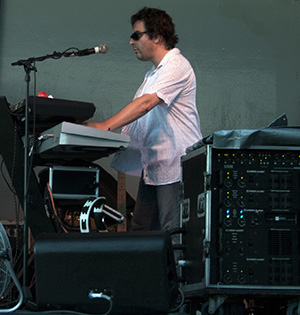 Oberhein Matrix 6 - I really learned about analog programming with this guy. I still have it.

Oberheim Matrix 1000 - Basically the same as the Matrix 6 but in a single-space, full rack version. I used to midi the two Oberheims together to get some trully PHAT sounds.

Yamaha MU90 half rack module - great all around bread and butter sounds.

Korg M1 - What can you say. A synth classic. I still have it and it actually still works, but its really beat up. I abused this thing for many years. I now use the software version of it in the studio and live when I require that 80's sound.

Korg Triton Pro 76 w/MOSS & SCSI expansion boards - The MOSS board, with its analog modeling is what makes this keyboard a beast and takes it over the top. One of the better instruments I've ever owned. Super versitle and reliable. I've dropped this thing literally down a flight of stairs... kept working. Fell flat on the floor from about 4 feet up... kept working just fine. It literally got waterlogged at a local outdoor gig where we got rain-drenched. Let it dry out thoroughly the next day... 24 hours later, bingo. Kept on playing. And it's banged around in the back of my truck for years going to and from gigs too. So I can't say enough about its reliabiblity and roadworthyness. Korg in general. Great stuff.

Ensoniq SD-1, 32-voice - Great onboard sequencer, but a very finicky instrument. Requires really clean power to operate best and it had certain mechanical/hardware related issues that required repairs/adjustments from time to time. But man the sounds are so nice. Especially if you got into layering with it. I still have it and use it in the studio.

Computer SoftwareCommordore 64 - Remember those? Man that thing used to get hot. Really hot. Dr T's sequencing software was the best game in town at the time. It was one of the first midi/software sequencer programs that offered direct event editing. We're talking early 80's.

Twelve Tone Cakewalk - I think I started Cakewalk for DOS in about '87. Then they ported the software for use in Windows in version 2. That was a revelation and a pain in the ass at the same time. Configuring Window's early audio and midi drivers was a major pain. Never really got into their current Sonar software.

Steinberg Cubase -  I started using it since version 2 for Windows. This is what I still use today. In my opinion, it's MIDI implementation is unparalled in a DAW.